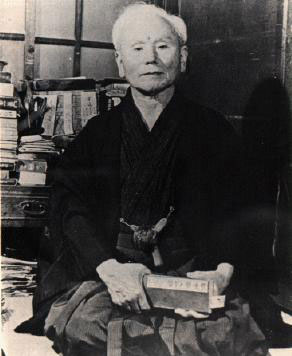 Shotokan is a style of karate, developed from various martial arts by Gichin Funakoshi and his son Gigo (Yoshitaka) Funakoshi. Gichin was born in Shuri, Okinawa and is widely credited with popularizing karate through a series of public demonstrations, and by promoting the development of university karate clubs, including those at Keio, Waseda, Hitotsubashi (Shodai), Takushoku, Chuo, Gakushuin, and Hosei.

As a boy, he was trained by two famous masters of that time. Each trained him in a different Okinawan martial art. From Yasutsune Azato he learned Shuri-te. From Yasutsune Itosu, he learned Naha-te. It would be the melding of these two styles that would one day become Shotokan karate.

Funakoshi had many students at the university clubs and outside dojos, who continued to teach karate after his death in 1957. However, internal disagreements (in particular the notion that competition is contrary to the essence of karate) led to the creation of different organizations—including an initial split between the Japan Karate Association (headed by Masatoshi Nakayama) and the Shotokai (headed by Motonobu Hironishi and Shigeru Egami), followed by many others—so that today there is no single "Shotokan school", although they all bear Funakoshi's influence.

Shotokan was the name of the first official dojo built by Funakoshi, in 1939 at Mejiro, and destroyed in 1945 as a result of an allied bombing. Shoto, meaning "pine-waves" (the movement of pine needles when the wind blows through them), was Funakoshi’s pen-name, which he used in his poetic and philosophical writings and messages to his students. The Japanese kan means "house" or "hall". In honor of their sensei, Funakoshi’s students created a sign reading shōtō-kan which was placed above the entrance of the hall where Funakoshi taught. Gichin Funakoshi never gave his style a name, just calling it "karate". 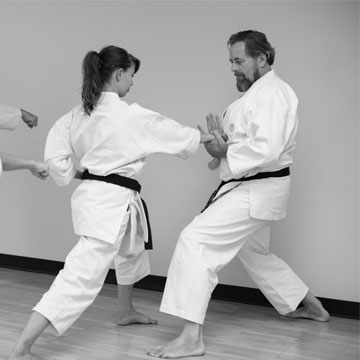 Techniques in kihon and kata are characterized by deep, long stances that provide stability, enable powerful movements, and strengthen the legs. Shotokan is often regarded as a 'hard' and 'external' martial art because it is taught that way to beginners and coloured belts to develop strong basic techniques and stances. Kata (forms or patterns of moves)

Initially strength and power are demonstrated instead of slower, more flowing motions. Those who progress to brown and black belt level develop a much more fluid style which incorporates grappling and some aikido-like techniques, which can be found in the black belt kata's.

Kumite techniques mirror these stances and movements at a basic level, but are less structured, with a focus instead on speed and efficiency.